Mozlem Brotherhood: the politicisation of the Egyptian Religious leadership.

Following are excerpts from an address delivered by Egyptian cleric Muhammad Zoghbi, which aired on Azhari TV on February 15, 2011. He called on the government-appointed religious leaders of Egypt to resign their positions; this includes the sheikh of Al-Azhar, which is the preeminent education center of Sunni Islam.
To view this clip on MEMRI TV, visit http://www.memritv.org/clip/en/0/0/0/0/0/0/2812.htm. 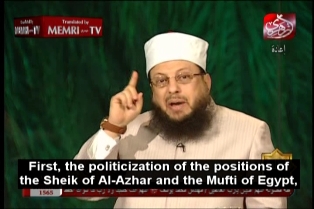 Muhammad Zoghbi: "Al-Azhar was subjected to a dangerous scheme, which was intended to shatter it and bring it down. This scheme consisted of three aspects: First, the politicization of the positions of the sheikh of Al-Azhar and the mufti of Egypt, as well as the position of the minister of religious endowments. These positions must be filled through elections. By no means should these officials be appointed by the president. Why? Because this politicization has led the people to lose their trust in Al-Azhar and its sheiks." [...]
To read the full report, visit http://www.memri.org/report/en/0/0/0/0/0/0/5036.htm.
Posted by Juniper in the Desert at 00:38