Back at yer, Rania, queen of anti-semitism and anti-Israel!!! 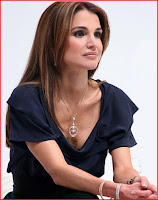 "Jordanian tribal figures have issued a petition urging King Abdullah to end his Palestinian wife’s role in politics, in a new challenge to the monarch grappling with fallout from uprisings in Tunisia and Egypt.
Evoking comparisons with the wives of Tunisia’s former strongman Zine al Abidine Ben Ali and Egypt’s President Hosni Mubarak, the signatories attacked Queen Rania’s Palestinian origin and accused her of using state funds to promote her image abroad without concern for the hardship of ordinary Jordanians."
Jordan: Tribes Turn Nasty on Queen Rania — Winds Of Jihad By SheikYerMami

"As a Palestinian, young Queen Rania's task is crucial in helping to unify a nation whose population is uncomfortably divided between the 60 per cent majority of Palestinian descent and the 40 per cent East Bank Arab Bedouin tribal stock." Mmmm...

Unlike her English born mothers in law Princess Muna and Queen Noor, previously Lisa Halaby, daughter of an American family of Lebanese descent, Queen Rania will not have the handicap of being regarded as foreign"...

Like Princess Diana, Rania enjoys talking to people and mingle with them in common places.(From here). 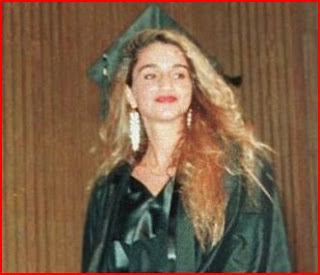 Here she is in 1991: looks like she has had some plastic surgery on her face. It wont make any difference: she is a nasty piece of work and no amount of surgery will correct it!