"This young Parisian Jew was kidnapped by a gang of thugs on January 21st and held captive for three weeks. On February 13th, early in the morning, he was found on the edge of a railway station, naked and handcuffed, his body covered with burn marks from acid and cigarettes. He had been savagely tortured and stabbed in the neck. He was not dead yet when discovered, but he died a few minutes later.

Little by little, information emerged about the crime. There were at least fifteen thugs, maybe more. They had used a girl to seduce Halimi into the trap where he was captured. They knew he was a Jew and they had chosen him for that reason. In his pocket they found the phone number of a rabbi and he was the first person they called, telling him: "We have a Jew. The family has to pay. If the family cannot pay, it will be the synagogue." In succeeding days, they called the rabbi again, howling sentences full of hatred. Later, they called the family, asking for $600,000, before lowering the price to $5,000. They spoke to the mother, to Halimi’s sisters, uncle, and father. When they were not asking for money, they were reciting suras from the Quran. In some of the conversations it was possible to hear Halimi screaming in the background. The thugs sent a videotape showing the young man naked, humiliated, handcuffed, just like on a Zarqawi videos from Iraq. [...]" The Murder of Ilan Halimi, by Guy Millière 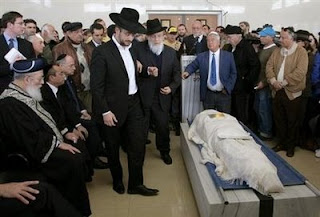 "They called many times, but the police, stating later that "technical problems" kept them from tracing the calls, told the family to stop answering the phone and to stop negotiations with the kidnappers. The police also claimed that there was "no anti-Semitism involved." " MAY ILAN AND HIS FAMILY BE AVENGED!! FUCK FRANCE!  AND MAY ALL THOSE INVOLVED  IN THE TORTURE,  MURDER AND COVER UP BE CURSED!!!
Philosemitism: 5th anniversary of murder of young French Jew Ilan Halimi
Posted by Juniper in the Desert at 06:59