The Story of Arab Apartheid and Arab Lies. 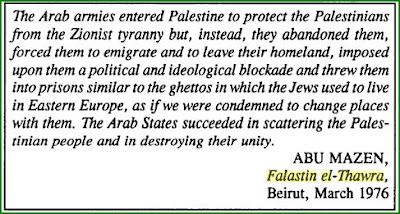 Love of the Land: Ben-Dror Yemini: The Story of Arab Apartheid: "The real “nakba,” the Palestinian-termed great “catastrophe” of the creation of Israel, is the story of Arab apartheid. Tens of millions, among them Jews, suffered from the “nakba,” which included dispossession, expulsion and displacement. Yet only the Palestinians remained refugees because they were treated to abuse and oppression by Arab countries. Below is the story of the real “nakba.”

In 1959, the Arab League passed Resolution 1457, which states as follows: “The Arab countries will not grant citizenship to applicants of Palestinian origin in order to prevent their assimilation into the host countries.” That is a stunning resolution, which was diametrically opposed to international norms in everything pertaining to refugees in those years, particularly in that decade. The story began, of course, in 1948, when the Palestinian “nakba” occurred. It was also the beginning of the controversy of the Arab-Israeli conflict, with the blame heaped on Israel, because it allegedly expelled Palestinian refugees, turning them into miserable wretches. This lie went public through academe and the media dealing with the issue."
Only the Arab states acted completely differently from the rest of the world. They crushed the refugees, despite the fact that they were their coreligionists and members of the Arab nation. In the words of Mahmoud Abbas, the Palestinian leader: “The Arab armies entered Palestine to protect the Palestinians from the Zionist tyranny, but instead they abandoned them, forced them to emigrate and to leave their homeland, imposed upon them a political and ideological blockade and threw them into prisons similar to the ghettos in which the Jews used to live in Eastern Europe” (from here.)
Posted by Juniper in the Desert at 11:27